skip to main | skip to sidebar

Back in Todos Santos

It is wonderful to be back in Guatemala! I am here on a 2week 5th year rotation with VWB, in partnership with the GIV of the Faculty. I am here to do another stray dog population count, as a continuing follow-up process of the dog population control program here.

I arrived on Monday evening, the 25th, with my Guatemalan mom Blanca there waiting for me at the airport. When we arrived back in San José Pinula (just outside of Guatemala City), the rest of the family was waiting up for us with fruit salad already prepared. It was like I had never left, except that according to them, my Spanish had improved (I am skeptical). The following morning I traveled with Blanca to the vet faculty, where I dropped off some text books, surgical scrubs, and a couple of stethoscopes that I had brought on behalf of the GIV. In the afternoon, I represented Vets Without Borders in a meeting at the Pan American Health Organization that included participants from the veterinary faculty, the Guatemalan rabies program, WSPA and McKee, discussing the possibility of expanding the project in Todos Santos to neighbouring communities. My first day came to a close at the movie theatre with Blanca and Alejandra (my host sister). We went to see “Up in the Air”, and I’m quite sure we were the noisiest group in there! 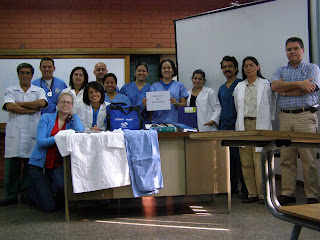 It’s funny, but I feel more aware of my surroundings this time to Guatemala. It’s almost as if I were in a bit of a haze last time, which has since been lifted. The colours seem more vivid, the scenery more interesting: the crumbling cement walls covered with bougainvilla, the trash along the roadsides, posters everywhere, the varying smells of wood smoke… The road up towards Huehuetenango was incredibly beautiful, the mountains in stark contrast with the sunny skies. The “chicken bus” (ancient multi-coloured school bus) from Huehue to Todos Santos climbed even higher, as we moved into the fog of the Cuchumatanes mountains. I traveled with Monica and Carmen from WSPA and Carla from McKee, who stayed for a few days to visit the VSF project and to meet with the municipal leaders to discuss the possibility of the project’s expansion.

We are staying at Roman and Christina’s guest house, up on the hill in the community of “Las Ruinas”, overlooking the town. They have a beautiful garden with irises, climbing flowers covering a trellis, humbingbirds, and a hammock chair. We have our own kitchen, and have been drinking tea like it’s going out of style. We each have our own bed, covered in a very thick pile of fleece and hand-woven blankets for the chilly nights. Monica also apparently has a few “guests” in her bed, as the other night I heard her looking for the “pulgas enormes” that have given her a nice row of bites along her back.

The day after arriving, we followed Andres to the final houses that needed collars for their dogs. At the same time, Andres noted out a list of 6 dogs that had various health problems that needed attention, and so we did some house calls to see what we could come up with. I will be heading back later this week with what medications we could scrounge up here. Friday we did our first day of the dog count, which you keen Blog followers may remember consists of spraying unowned dogs (the ones that don’t have collars) with a red food-colouring based paint from a high-pressure paint gun. This was preceded by a trip down to the dump and the slaughterhouse at 5:30 am to observe the dog activity. No dogs at the dump, but they were apparently in the process of slaughtering a cow, because there were at least a dozen dogs hanging around outside the slaughterhouse waiting for food. I didn't stick around too long to watch, because to be quite honest, being out on one's own at that time in the morning is always a little creepy! When we passed by later during the count, there were about 15, fighting over a big piece of entrails. 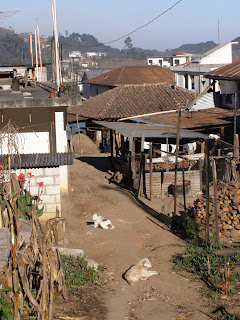 Friday afternoon I went back with Andres to visit one of the dogs that required medical attention: a puppy of about 4 months who is very thin, and has a decreased appetite and diarrhea. The dogs here are only vaccinated against rabies, so parvovirus could be a possibility. Within my capabilities here (which are limited), I decided that I could bring back some oral rehydration fluids, some chicken to try to stimulate its appetite, and dewormer. I was pleasantly surprised to find that when I arrived with Andres, the owner had already gone out and purchased dewormer and had started the treatment! I went back a couple of times over the weekend to check on "Muñeco", and was happy to see him bouncing around with a lot more energy on Sunday.

It is much warmer than I expected it to be. Last time I was here, I didn’t have as many warm clothes as I would have liked, so this time I came ready for an Antarctic expedition. The evenings and early mornings are quite cool, but by 9am things heat up significantly, and walking around 16km (up hill, both ways) in the direct sun is hot work! I have a wonderful burn on my face (which I refuse to look at in the cracked piece of mirror that is next to our wash basin), but I am told that one side of my face is worse than the other, that my nose and ears are “muy rojas”, and that I have paler lines from my glasses. Awesome. 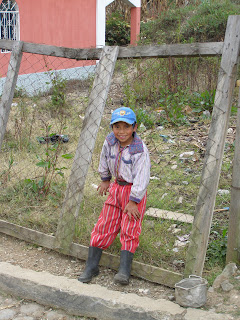 While the girls were here, we had lunch in the comedors. The servers have been very obliging to us vegetarians, serving up variations on the theme of eggs (fried or scrambled), rice, beans, French fries, and local cheese, which we like to ask for with subtle differences in each order (poor waitresses). The cheese is VERY yummy, although unpasteurized, and I'm quite sure that I would react positively to a tuberculine test right now :) Saturday was market day, and far too busy around town to continue the dog counts (we will finish Monday through Wednesday). There is little I enjoy more in life than an open air market, and the one in Todos Santos has to be among the best! People come in from all the neighbouring communities, bringing with them assorted fruits, veggies, woven cloth and all sorts of different wares. You can tell the Todos Santeros apart from the rest because of their typical dress, and I tried to give them my business as I shopped around for plantain, cilantro, eggs, tomatoes, avacados... in seventh heaven! Today on our count, Andres started teaching me a bit of Mam (the local Mayan language). Most people here speak a bit of Spanish, or at least understand, but the primary language is Mam. I should now be able to ask for my eggs, beans and coffee at the comedor in Mam, I can count to 10, and say thank-you! Andres' french is also coming along, although "fruit" is causing him a bit of difficulty! 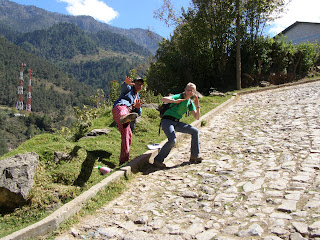 Keep posted for the last leg of my trip! Thanks for following!
Posted by Taya at 1:31 PM

Taya Forde will be working in partnership with the Groupe International Vétérinaire (GIV) of the on the Xela Project in . The Xela project, which is a collaboration between several local partners including the Pan American Health Organization, the and the NGO Rescape, is a long-term rabies and stray dog control effort. Taya will be conducting an evaluation of the current rabies surveillance system for the province. A successful surveillance system will help determine the prevalence of rabies within a given area and whether or not the current management practices are effective. The information collected during her two month stay will be used in the development of future rabies prevention programs.

Taya will also be spending two weeks in Todos Santos performing a dog population census as part of the follow up evaluation of VWB/VSF's canine population control project. To read more about the Todos Santos project, please click here.